Two-hundred eighty-eight and counting: That’s the number of newborn babies that, rather than facing 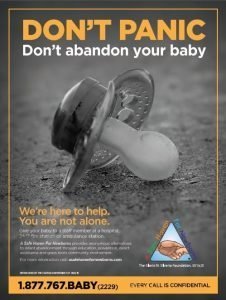 abandonment, have been surrendered at staffed fire stations and other authorized sites taking part in the “Safe Haven” baby surrender program. Such locations are clearly marked with Safe Haven signs to let the public know newborns can be left here without fear for the babies’ well-being.

Operated by the nonprofit 501(c)(3) Gloria M. Silverio Foundation, the “A Safe Haven for Newborns” program, in association with states like Florida and other jurisdictions that have passed “safe haven” laws, allows mothers to surrender uninjured newborns up to 7 days of age with no questions asked.

Under the program, the mother must give the newborn directly to a firefighter or EMS provider to ensure the baby doesn’t get left unattended for a prolonged period. (Since these children may be in poor health, leaving them outdoors can be fatal, even without the risks of exposure and predation.)

As soon as a newborn has been surrendered, they are initially checked by an EMT and then taken to a nearby hospital for more detailed examination and care. (The Safe Haven program also allows newborns to be surrendered at hospitals.) From there the baby is fast-tracked for adoption.

“The Safe Haven program gives desperate mothers who cannot care for their babies, for whatever reason, safe places to surrender them for adoption so these children can have long and happy lives,” says Nick E. Silverio, who created the Gloria M. Silverio Foundation in 2000 in memory of his late wife. “We don’t judge why these mothers feel compelled to make these choices, and we don’t ask questions. We offer them an alternative to abandonment that allows them to give their babies life, which is a profoundly courageous and unselfish choice on these mothers’ parts.”

At about 9 a.m. on September 13, 2018, firefighter-paramedic Pierre Colin was finishing up his shift with Florida’s Davie Fire Rescue Department.

“I had just done my paperwork and was packing up to leave when the doorbell rang,” Colin says. “There were two women there, one of whom was holding a newborn wrapped in a blue towel. They told me they were walking their dog when they heard a baby crying. The two said they found the baby girl wrapped up in a tree beside the road, so they took her down and brought her to the station house, which has a big Safe Haven sign outside.”

Having handed Colin the newborn, the pair left. In line with his Safe Haven training, he did not press the two for details. Instead he assessed the baby’s condition, which was dire.

“The newborn was very unresponsive, cold, and her color was pale due to blood loss,” Colin says. “Her umbilical cord had not been clamped, and so her body had had lost about two-thirds of its total blood volume.”

With the help of an engine crew that had just pulled into the firehouse, Colin clamped the cord and radioed for help. Rescue 38 soon arrived, providing lifesaving care until the baby was taken to a nearby hospital. The department’s medical director, Peter Antevy, MD, praised his team for its quick thinking, attention to high-quality BLS care, and having the wherewithal to immediately check the newborn’s body temperature.

“I couldn’t be more proud of my crews for how they performed that day,” Antevy says. “Upon arrival at the emergency department, the newborn was immediately placed in a warmer, intubated, transfused, and otherwise pulled back from death’s door.”

This was the third newborn saved at Davie fire stations in the last 15 year. Nick Silverio named her Mariola to honor a compassionate volunteer who worked with the Safe Haven program.

Getting the Right Message Across

For DFRD Battalion Chief Daniel Moran, that the baby was safely given to firefighters rather than abandoned is the most important message to get across. “The mother made the right choice by bringing her baby to a Davie Safe Haven fire station,” he says. “In situations where mothers feel they have no option, we are the option. This mother did the best thing for her newborn by surrendering her to us. She literally saved her baby’s life in doing so.”

Ideally the department’s firefighters and EMTs ask mothers surrendering babies to provide a medical history of their families—without naming names—so hospital personnel can be aware of potential issues to look out for. But when the situation is life-threatening, as happened with baby Mariola, tending to the newborn’s immediate concerns comes first.

An Opportunity to Save Lives

The Gloria M. Silverio Foundation is happy to help any fire/EMS agency launch its own Safe Haven program. “To make this possible their jurisdiction must have a Safe Haven law in place, so mothers can surrender their babies without fear,” says Nick Silverio. “We can help make this happen, in addition to helping with setting up Safe Haven sites and providing initial training.” (The Foundation does not offer this service to police departments, since “it is in the nature of police officers to ask questions, which wouldn’t work here,” Silverio says.)

James Careless is a freelance writer and regular contributor to EMS World.

Copyright © 2020 A Safe Haven for Newborns 501(c)(3) All rights reserved. No material from this website may be copied without the express and written permission of the Gloria M. Silverio Foundation. A COPY OF THE OFFICIAL REGISTRATION AND FINANCIAL INFORMATION MAY BE OBTAINED FROM THE DIVISION OF CONSUMER SERVICES BY CALLING TOLL-FREE. REGISTRATION DOES NOT IMPLY ENDORSEMENT, APPROVAL, OR RECOMMENDATION BY THE STATE. 1-800-HELP-FLA (435-7352) www.FloridaConsumerHelp.com Registration# CH31702 A Safe Haven alliance and partnership with hospitals, fire stations EMS and DCF is saving lives. 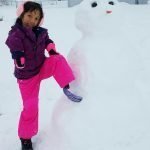