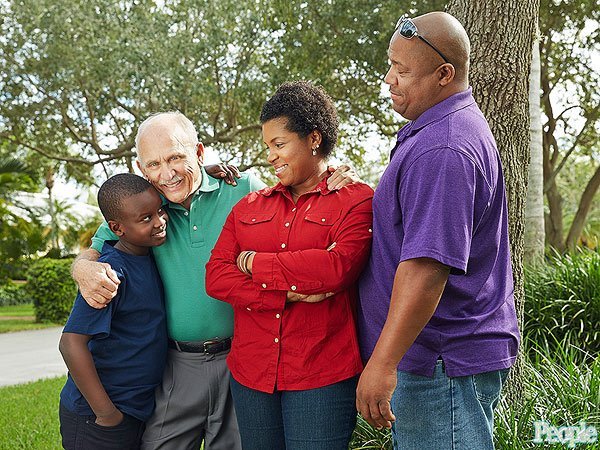 Nick Silverio with (from left) Kristopher Terrell and his parents, Aja Iglesias-Terrell and Richard Terrell
JEFFERY A. SALTER

As the founder of A Safe Haven for Newborns, a nonprofit he founded in 2001 to provide a 24-hour-bilingual referral hotline for new mothers on the verge of abandoning their infants, Silverio, says each call can save a child.

“It’s an overwhelming experience to know a child can grow up,” says Silverio. “It feels just as overwhelming the first [time a child was saved] as it does the 206th.”

To date, Silverio has helped 206 newborns find their way to loving adoptive homes in Florida. Looking to support the safe haven law passed by the Florida legislature in 2000 that enables desperate parents to leave infants up to a week old at hospitals and fire stations no questions asked, Silverio dipped into his own pocket the following year begin his organization.

“It’s my purpose in life,” says Silverio, who takes no salary from the nonprofit and who has also helped frightened moms get their babies back under the law’s 30-day grace period.

His outreach changed the life of 10-year-old Kristopher Terrell, who is now the youngest of five children to parents Aja Iglesias-Terrell, 44, and Richard Terrell, 53. Ten years ago, Silverio answered his 24-hour crisis hotline to discover a frightened teenage mother on the other end. A week earlier she’d given birth to a baby boy. Now, feeling in no position to raise a child, the distraught girl said she didn’t know what to do.

Calmly, Silverio told her he would be right over. Hopping in his car, Silverio purchased a baby carrier, then continued on to the girl’s apartment, where he found the anxious teen hovering over a sleeping infant clad in a blue and white jumpsuit – little Kristopher Terrell.

“Uncle Nick is my hero,” says Kristopher, now a fourth-grader. “He’s the one who introduced me to my mom and dad. It’s good that he helps babies.”

The nonprofit proved a lifesaver for Silverio, too. Married almost 32 years to his beloved Gloria, he was devastated when she was killed in a car accident in 1999. Godfather to 14 children, Silverio bore the loss without the companionship of any children of his own – his attempts with Gloria to start a family having ended one heartbreaking Christmas Eve after Gloria suffered her second difficult miscarriage.

Looking to honor her memory, he found a fit when he learned about Florida’s safe haven law meant to protect babies from being abandoned.

“Helping give these babies a life,” he says, “has turned my tragedy into joy for others.”

Today A Safe Haven for Newborns, staffed by 300 volunteers, operates in all 67 Florida counties, partnering with fire chiefs, emergency medical services and hospitals to take in infants and then move them on to adoption agencies. Thanks to Silverio, other states look to Florida for advice on implementing infant-protection laws.

“When I was growing up, you’d hear of babies being abandoned in canals, in public bathrooms, in garbage dumpsters,” says Florida state senator Rene Garcia. “Since Nick got involved, you never hear of that. He took it upon himself to bring awareness to the rest of the state to show this law exists, to make sure teens and women and parents knew this law was out there.”

“He’s reaching people in their most desperate moment,” says firefighter Tammy Henghold, who was twice on hand when safe haven babies were left at her station in Lauderhill. “He’s saving a life every day.”

“Because of Nick’s act of love,” she says, “we are blessed to have Kristopher in our home and our life. We consider Nick family.”